In 1925, Carter P. Brown founded the Tryon Riding & Hunt Club to support equestrian activities in Polk County in Western North Carolina. During his lifetime, he promoted and produced equestrian events and activities while working with landowners to maintain hundreds of miles of riding trails. His idea was to build an organization, a club, to perpetuate a wholesome and productive role in the preservation and encouragement of the good life—with horses—in western North Carolina.

The Club was first incorporated in 1960 as a nonprofit organization . In 1985, its Articles of Incorporation were revised to update the three original purposes:

Thanks to the ongoing efforts of the Tryon Riding & Hunt Club, the Town of Tryon and the surrounding countryside are recognized nationally for carrying forward the traditions of fine horsemanship. Tryon is known as one of the most prominent and historic equestrian centers in the Southeastern United States.  Today TR&HC-sponsored events conducted by its volunteer committees attract thousands of people  annually and influence many newcomers to settle here.

Yet the Tryon Riding & Hunt Club Inc. is a unique organization in that the majority of its members do not own nor ride horses. Many of its members are horsemen, but others are farm and estate owners, businessmen and women, and members of the general public. This is an enthusiastic, congenial, community-minded cross-section of residents dedicated to promoting Polk County as an equestrian center.

Carter P. Brown died on Nov. 15, 1978, but his vision lives on through the Tryon Riding & Hunt Club. Thanks to his inspiration, the Club and its members have been able to carry on his purpose for western North Carolina as a destination and a home for equestrians, a fitting memorial to a man with big ideas. 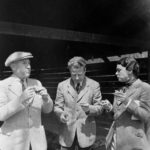 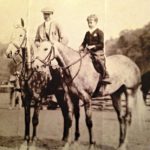 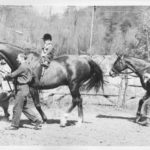 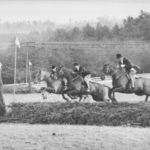 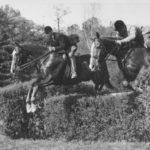 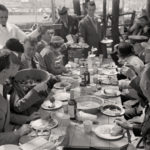 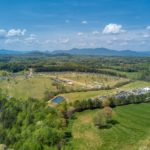 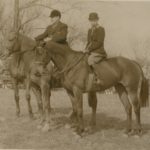 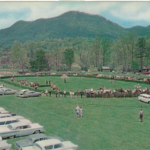 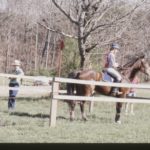 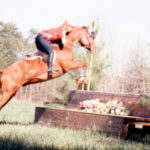 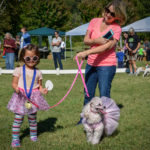 Tryon’s roots have always been deeply intertwined with its passion for horses. Founded by iconic equestrian Carter Brown in 1925, The Tryon Riding & Hunt Club’s  95-year history of sportsmanship, historic preservation and forward-thinking have made the Club a hallmark of this thriving equestrian  community.

Here are some of the milestones that created an esteemed status for the Tryon Riding &Hunt Club:

1918: Brown purchases the former tuberculosis sanitarium and turning it into the Pinecrest Inn at which Brown extended his hospitality to many like-minded visitors whose love for the area would take root.

1925: Brown forms Tryon Riding and Hunt Club to foster growth of equestrian sport and population.  In the following year he founded the Tryon Hounds Fox Hunt where he served as their huntsman for the first five years.

1926: Brown finds land to lease and convinces the Chamber of Commerce to host first horse show. After losing $275 on this event, the next year’s show is hosted by the Tryon Country Club. Although attracting notable exhibitors, it was still a risky investment.

1929: The Tryon Riding & Hunt Club take over the show. It included a bench show for Walker and July Night Hounds and later evolved into a formal show for foxhounds.

1930s: Volunteers from the Tryon area joined with the nationally-known Harmon Family to donate time, money and materials to build the showgrounds at Harmon Field, a 36-acre picturesque park with three show rings and 140 permanent stalls. (Life Magazine even did a photo spread on the horse show.)  Community support for the event was so strong, that when one year the show lost money, residents produced a Vaudeville Show to cover the deficit.

1942: Alfred Plamondon, Jr. from Indiana visits Brown expressing interest in the area. In response to this interest, Brown purchased the Block House, a structure now designated as a Nations Landmark, which was built as a defensive outpost during the French and Indian War and afterwards as a tavern and gambling house as it was conveniently located on the NC/SC state line patrons could easily escape the law by stepping to the other side of the room.  The structure was rehabilitated by Brown using pieces of the original building and scavenged materials in keeping with Brown’s typical architectural style.

1947: Plamondon offered his Block House be used as a race meet for the steeplechase after the first steeplechase in Tryon failed. Brown constructed a half mile track which was used until 1988.

1940s -1960s: The first civilian equestrian team after World War II  was formed in Tryon at Harmon Field and at the Cotton Patch with Bert Denemethy as the Chef D’Equipe. Some of the greatest showjumping riders – Frank Chapot, William Stienkraus, Hugh Wiley, and George Morris, just to name a few – were training in Tryon for the Olympics.

Additions and improvements were made to the show grounds including planting trees, enhanced footing in the rings. In the mid-1960s the local Boy Scout troop directed parking and Girl Scouts troop sold programs to support the horse show as well as provide community service. In an effort to support local artists, an art contest was held for posters to advertise the Tryon Horse Show. Prizes include box seats, parking places on the rail and general admission tickets.

1988: The steeplechase moves to the Sandlin Track at the Foothills Equestrian Center (FENCE) as track construction is completed.

1989: The Horse Show grew too large for Harmon Field and it moves to FENCE where it remained through 2013.

2014: The show, now called the TR&HC’s Charity I horse show moves to the new Tryon International Equestrian Center (TIEC) as part of a 5-show partnership with TIEC.

2017: A failing track forces the steeplechase to move again, this time to a new track  constructed off Route 9 known as the Green Creek Racecourse.  The Steeplechase has a new home.

2019: USEF elevates the Charity Horse Show status by designating it as an official Heritage Competition.

2020: The 92nd Annual Charity Horse show takes place amid pandemic. No spectators allowed and strict health precautions enforce. The show sells out with over 700 horses.

Horse Shows: Throughout the year, the Club sponsors several hunter/jumper horse shows in various locations as well as its very own "Morris the Horse" Trials at FENCE. Members participate as competitors, as volunteers who ensure each event runs smoothly or simply as spectators who enjoy being a part of the sport. The Charity Horse Show in particular has had significant community involvement throughout its 92-year history of sportsmanship and preservation.

Hound Show:  A number of hound shows have been held over the years, but the most recent official show was in 1987 at Harmon Field.  In 2020, the Club once more ran a small hound show with plans to formally re-introduce the traditional Horse and Hound Show in 2021.

Any and All Dog Show:  In 2020, the Club will conduct its 87th annual Any and All Dog Show.  Open to the public, this is a fun show for all ages to come and show off their pets and compete in a series of unique classes such as; Dog with the Longest Tail, Dog that Looks Most Like Its Owner, Best Dressed Dog, Best Trick and Dog that Most Looks like it Wants to Go Home.

Morris the Horse: Each visitor to Tryon meets a horsey sentinel at the intersection of Trade and Pacolet street. This is "The Tryon Horse," aka Morris.  Originally created by a local toy shop during the Carter Brown era, the horse was known simply as The Tryon Horse for many years until the Wilderness Street Gang, who annually decorated him for Christmas, gave him the name of Morris.  The Town of Tryon now officially owns Morris, but The Tryon Riding & Hunt Club helps to maintain  this famous steed who has become the Club’s symbol.

The Tryon Riding & Hunt Club was instrumental in getting some members of the United States Equestrian Team to train at Tryon’s Cotton Patch Farm in preparation for the 1956 Olympic Games. The jumping team, coached by Bert de Nemethy, included Hugh Wiley, William Steinkraus, Frank Chapot and Charles Dennehy Jr. Although the 1956 Games were held in Australia that year, the equestrian events could not be held in Melbourne due to the country’s strict quarantine regulations for horses. The equestrian events were held in Stockholm, Sweden, five months earlier. 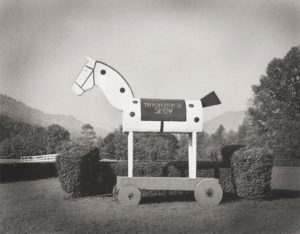 At the corner of Tryon’s Trade and Pacolet streets stands a well-known landmark, Morris the Horse. This large white hobbyhorse symbolizes Tryon’s equestrian roots, a replica of the days when toy wooden horses like him were handmade by the Tryon Toymakers. He is both a symbol of the community’s love o

f horses and a replica of an era gone by when wooden toy horses just like him were made in Tryon and shipped all over the country.

The first Tryon Horse was built of wood by Meredith Lankford and Odell Peeler, two employees of Tryon Toy Makers, to advertise the first horse show held at Harmon Field in 1928 and sponsored by Tryon Riding and Hunt Club. Pulled by a car through town, the horse would lift its tail and head when the reins were pulled. The current Morris, made of fiberglass, is the 4th generation and, while this Morris does not travel around town as his ancestors did,  he has appeared on Christmas ornaments, street signs, T-shirts and more.

In 2019, local artisans Fred Herres and Barney Eiserloh took on a big undertaking when the Tryon Downtown Development Association approached

them to build a “mobile” Morris that can be used in parades and other activities celebrating the Tryon Horse.  The Tryon Riding & Hunt Club stepped in to cover all expenses, and Henson’s Building Material donated many materials and provided the remainder at a discount to build a 7 ft tall version of the Tryon icon.

In 2020,  TR&HC will re-name their annual horse trials as “Morris the Horse” Trials to celebrate the Club’s link to this icon.  The Morris theme will “run” through the event. 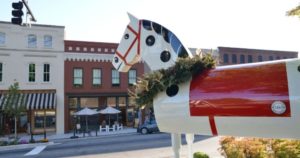 At the Annual Tryon Christmas Stroll, TR&HC follows a decades-old tradition by hanging a wreath on Morris.  Guests and members celebrate the occasion with beverages and a "new" tradition of having local mini-horses dressed as reindeer join Morris in the celebration.  Finally, several days later, Morris leads the Tryon Christmas Parade as TR&HC members hand out horse lollipops and Santa closes the parade as he “comes to town”, much to the delight of all the children. 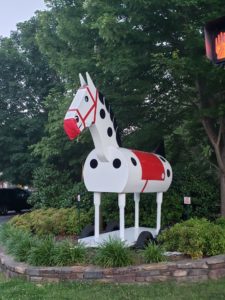