The sold-out event brought approximately 1,000 horses and riders from across the country. Adding to the excitement, TIEC hosted $137,000 Grand Prix Saturday night attracting top riders from all over the world. “We are into our 6th year of sponsoring and hosting the Charity shows with TIEC, each year the partnership has become stronger,” says Angie Millon, TR&HC vice president and show chairman who also competed at the event.  “We try hard to keep the small-town warmth, hospitality and sense of community that the TR&HC shows are known for.  The TIEC team manages this huge multi-ring five-day horse show seamlessly.

Millon points out the enormous changes since the TR&HC held its first horse show at Harmon Field back in the 1920’s when it was a one day one-ring event. “Horse showing is now a multi-million-dollar industry.  Thanks to our partnership with TIEC, TR&HC’s A rated shows can thrive and continue to grow and improve and continue to positively impact on our local economy.”

In addition to the competition, TR&HC sponsored a Thursday evening “meet and greet” with hunter rider superstars Liza Towell Boyd and Havens Schatt, and Jack Towell, head trainer at Finally Farm in Camden. Open to the public, they discussed how to produce top international derby horses and fielded questions from the engaged audience for over an hour. Attendees took what they had learned straight to the ring as several competed in the three derbies over the following days- a $50,000 International Hunter Derby, a $5,000 National Derby, and a $10,000 Pony Hunter Derby. “The National Pony Finals and the International Derby finals are held each year in early August at the Kentucky Horse Park in Lexington.  Many of the top talented horses and riders used this show as their last tune-up before heading to the finals,” Millon explains.

Millon points out that a special effort was made to make it a fun and memorable show for all the junior exhibitors with barn decorating contests, a costume class, a horseless (hobby horse) horse show, popsicles, and free ice cream vouchers awarded. Best of all, spectators were allowed back on the show grounds to cheer on the riders and their horses and enjoy the activities!

Meet and Greet with Liza Boyd at Charity 2 Horse Show

TR&HC will be hosting a meet and greet question and answer session with nationally acclaimed hunter rider Liza Boyd at our Charity 2 Horse Show held at the Tryon International Equestrian Center on Thursday July 8th at 5:00-6:30 at the Legends Club patio. Please RSVP by Tuesday July 6th to office@trhc.org.

Tryon, NC-- June 24, 2021 –The Tryon Riding & Hunt Club (TR&HC) has named Leigh Borreson as its new executive director, entrusting its rich 95-year legacy to a experienced professional and former Board member who has served various capacities including marketing, sponsorships and event management

Borreson now assumes additional responsibilities that will create more engagement and visibility for TR&HC in the community. TR&HC President Terry Lynch says, “Leigh is well-prepared for the executive director’s role. She knows the community, the Club and she’s also an equestrian who has successfully competed.  Her commitment to the Club’s vision and personal connection with our supporters makes her the ideal choice to be the face of the Tryon Riding & Hunt Club. Leigh understands the culture and character of our area and the important role the Club plays in the community. ”

Her duties will include strategic planning, administrative oversight and membership development and community relations. Borreson will remain a key contributor to marketing and sponsorships and continue to assist with major show events.  TR&HC Vice President Angie Millon adds, “The (Executive Director) position demands energy, ‘horse sense’ and passion. Leigh brings all of that and more to our mission.”

Borreson recently left a 30-year career in the staffing industry where she managed sales in several regions growing her employer’s brand. A resident of Landrum SC, she has decades of experience as an accomplished hunter-jumper competitor,  and enjoys three horses and five dogs on her own small horse farm. 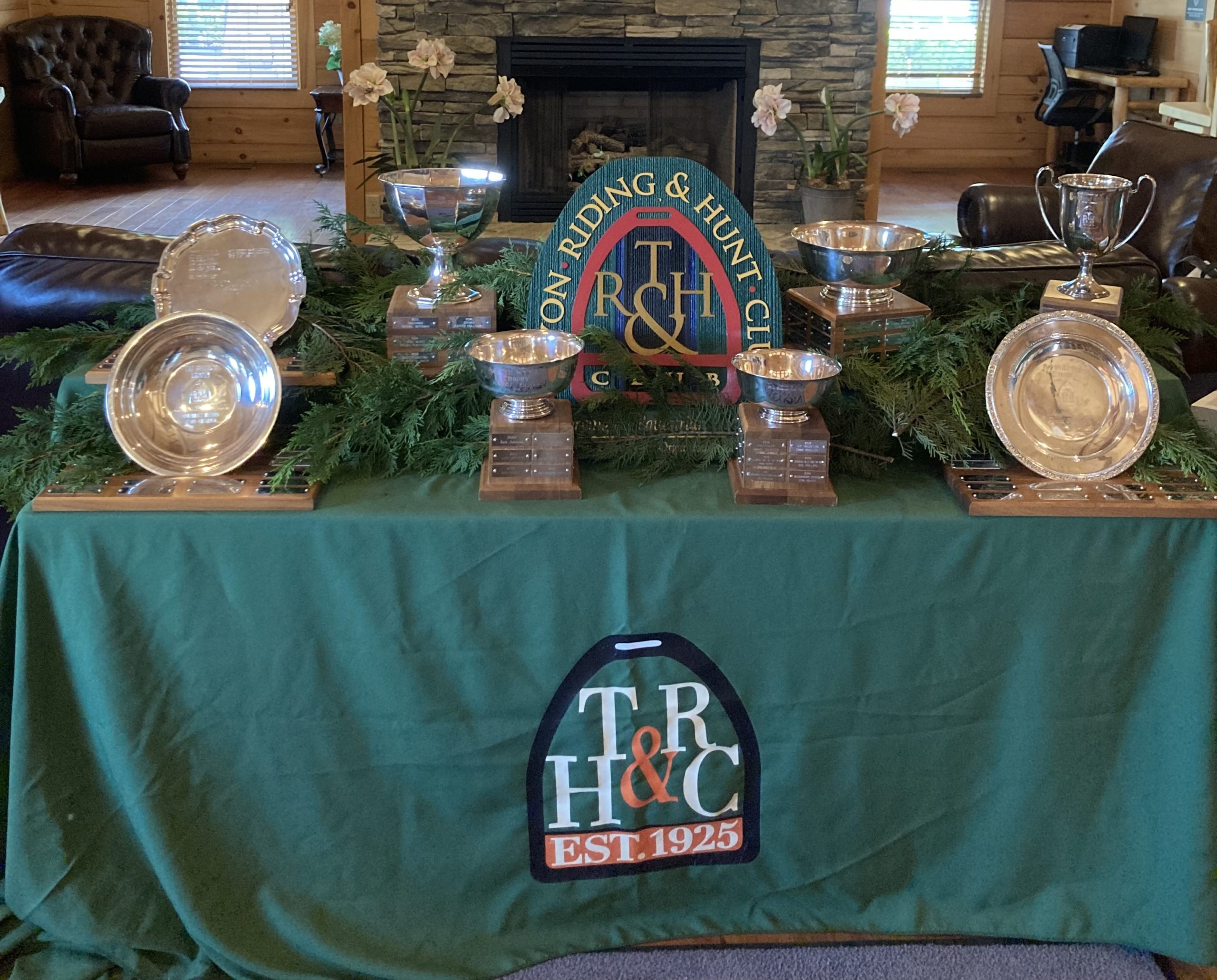 Tryon, N.C. (June 14, 2020) – After a year of pandemic restrictions, the show rings were buzzing with activity and spectators as over 600 horses from all over the United States competed over the historic five-day Tryon Riding & Hunt Club (TR&HC) Charity Horse Show.  The 93rd Charity Show,  held at the Tryon International  Equestrian Center this past week benefits local charities.

“It couldn’t have been more perfect,” says Angie Millon, TR&HC vice president and committee chair of the Charity Shows. “Everyone seemed so thrilled to be back to almost normal conditions. The horses and riders were amazing; the winners outstanding.  The competition was elevated to new heights!”

Living up to its tradition of philanthropy and support to local communities, the TR&HC announces three local charities to be the recipients of donations: The Sanctuary at Red Bell Run, Columbus, NC; Hope Remains Ranch, Spartanburg, SC; and Pet Tender Angels, Landrum, SC. Each charity received a check for $2,000.

“It’s gratifying to be able to give back to local charities who contribute so much making life better for people and the animals we love,” says Terry Lynch,  Board president.

TR&HC has office hours at our new location 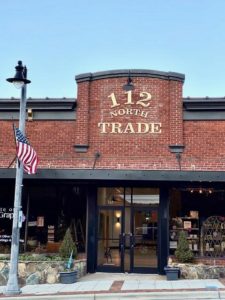 TR&HC moved to its new home office in the heart of Tryon at 112 North Trade Street, Suite 12. We now have office hours! Stop by and see us Tuesdays and Thursdays from 10am to 2pm while you're enjoying beautiful downtown Tryon!

TRHC will host a buffet dinner for Members, Sponsors, and Advertisers Only on Friday, June 11 during the Hunter Derby at Club's Charity I Horse Show.

The 73rd Block House Steeplechase Races will be held on Saturday, June 5 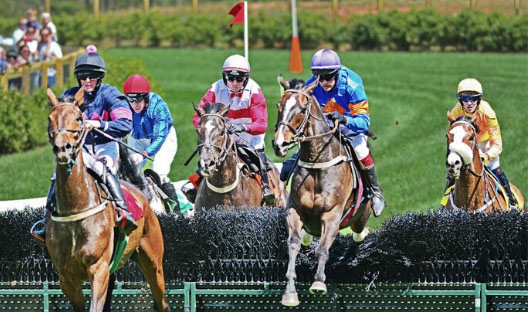 The 73rd TRYON BLOCK HOUSE RACES, the historic steeplechase of Tryon Riding & Hunt Club, will take place on June 5, 2021 at the Green Creek Race Track in Columbus, NC. Tickets for the 73rd Tryon Block House Races are available to the general public now and may be purchased at TRYON.COM, by contacting tickets@tryon.com, or by calling 828-863-1002.

TRHC, in collaboration with the Town of Tryon, announces a Steeplechase Pre-Race Concert at Rogers Park in Tryon with the Super 60's on Friday evening, June 4, from 6-9pm. Free to the public.

There will be fabulous band, The Super 60’s and the Mountain View BBQ food truck will be on hand for all your culinary needs! PLUS we will be auctioning a beautiful painting by our very own local artist Joan McIntyre. Join a fun filled event to start off the Steeplechase weekend!

PRESS RELEASE: Over 50 competitors compete at TR&HC’s first Horse and Hound Show since the 1970’s

After 14 days of consecutive sunshine, Saturday brought cloudy skies and continuous rain which did nothing to deter the determination of over 50 competitors at the Tryon Riding & Hunt Club’s Horse and Hound Show, an event that had not been held since the 1970’s.

“After months of careful planning,” says Angie Milon, Easely, S.C. who was lead organizer, “we quickly learned that flexibility is key as Mother Nature unleashed much needed rain. Unfortunately, the hound show was cancelled as yet another sporting event fell victim to the pandemic.  But thankfully, FENCE’s covered arena allowed the derbies to run as riders competing over a lush and colorful course designed by show manager Lewis Pack, Columbus, N.C.

Heralding to start of derby,  “Tot” Goodwin of Goodwin Hounds, sounded his hunting horn to officially call the class to order.

Cascani, owned by Mary Lantz, ridden by professional Giselle O’Grady of Clear View Farm in Landrum, S.C. took home the  $2,500 prize in the TR&HC featured derby. Cascani, an elegant bay Holsteiner gelding, was originally a 2-star event horse who has transitioned to a successful second career as a show hunter.

The $1,500 Mini Morris Derby was won by Orion’s Diamond Ace, owned and ridden by Sarah Flannery. “Ace” is truly a “jack of all trades” with a long career in pony hunters, pony jumpers and equitation.

The course was built with brush donated by Spiegel Farm, and hand cut natural rails to simulate an old-style field hunter course. Down to Earth Garden Center graciously loaned a truck load of lush plants to decorate the course as well. Photographer Liz Crawley captured the riders and winners.

Winners received neck sash ribbons donated and presented by Christie Heuman; medallions donated by Lewis Pack of the Harmon Classics LLC;  and engraved silver platters donated by The FarmHouse. A traditional victory gallop of the winners closed  the day of competition.

“Despite the weather a good time was had by all,” Milon says, “the TR&HC looks forward to hosting the event again next year!”

TR&HC announces publication of its inaugural Horse Country Quarterly which will document happenings in and around Tryon horse country in photos and stories.  To read the first issue as an E-magazine, please click here.

It is with great sorrow that the Tryon Riding and Hunt Club announces the unexpected passing of Andrew Brannon. Drew, a past TR&HC president, was a joy to all that knew him, and a huge contributor to the Tryon community. He was kind, gentle and encouraging to everyone he met. Our deepest sympathies go out to all of his family and friends.

Drew, while not a rider himself, was part of a family that has a long equestrian tradition in Tryon. He was actually a third generation president of TRHC following both his father and grandfather as past presidents, and led the Club for two years. He loved dogs and led the running of our Any and All Dog Show for many years. Also, as a past president of the Club, Drew had recently taken on a special project to investigate establishment of an endowment program for the Club and his absence will be particularly missed on that effort. His tragic passing will leave a giant hole in the fabric of the Tryon community.

TR&HC has a new home!

TR&HC announces completion of its move to its new home office in the heart of Tryon at 112 North Trade Street, Suite 12.  If you are in the vicinity, please stop by and say hello.  We are still working out staffing hours so check back with us soon!