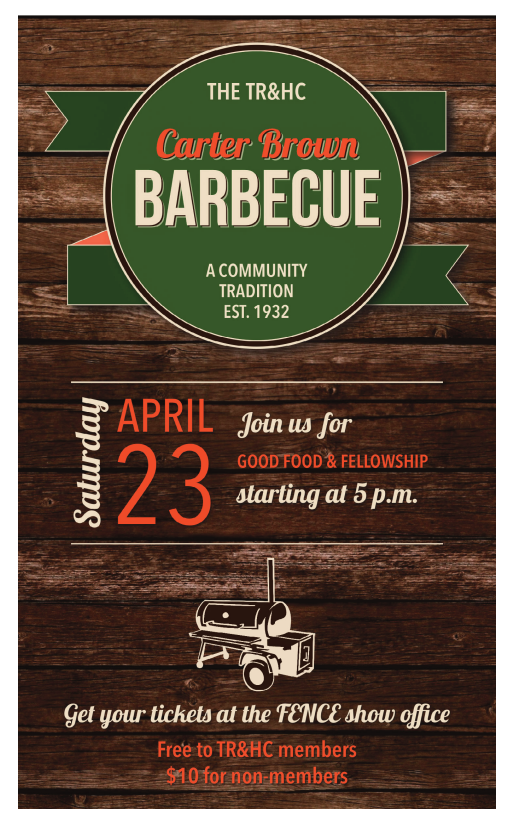 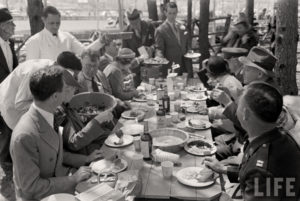 An event that harkens back to one of the first events produced by TRHC – the Carter Brown BBQ was a meal for the community that was held in conjunction with the Charity I horse show.  It is believed that the first BBQ took place in 1928.  Mr. Brown wanted to thank all of the landowners who allowed the Tryon Hounds, also founded by Carter Brown, to hunt on their properties during the year.  So, he organized a traditional BBQ with pulled pork, BBQ chicken, macaroni and cheese, cole slaw, and cornbread accompanied by sweet tea, of course, and invited all of the landowners to come and eat for free.  The event was highly popular and became the lead-in to the horse show later in the week.

Somewhere along the way, the tradition of the BBQ fell by the wayside but a modern version was reinvigorated by the Riding & Hunt Club in 2018 at Harmon Field.  About 125 folks were served.  The following year in 2019, the event was combined with a horse show and became known as the Tryon Horse and Hound Show.  A Parade of Horses was organized by the Tryon Downtown Development Association through downtown Tryon as a lead-in to the BBQ and people were encouraged to move on down to Harmon Field for the big meal as the parade ended.  About 340 people were served Carter Brown’s traditional menu, catered by Southside Smokehouse, for free, or at least a small donation.  It was a great party and the once-traditional event was officially re-born.

The 2022 Carter Brown Barbeque will be held at FENCE during the Horse and Hound Show.  It will start at 5pm this Saturday and go until the food runs out.